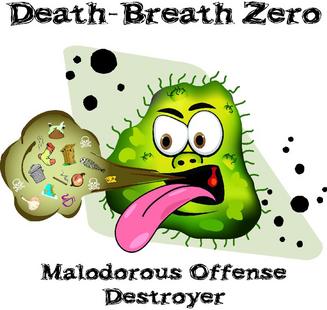 The restorative ingredients in Death-Breath Zero Mouthwash provide the human body with effective tools to fight off invasive bacteria, viruses, & other health-threatening predators.
How?
By working in harmony with the body's natural tendency to self-repair.

XYLITOL:  Xylitol is recommended by dentists, medical doctors, periodontists, pediatricians, & many health organizations & health professionals worldwide as a sweetener for anyone concerned with dental health, upper respiratory health, & sugar consumption, in general. Pure xylitol is a naturally occurring 5-carbon sugar alcohol found in many fruits & vegetables & is produced in small amounts by the human body. It has the same sweetness as sugar but with 40% fewer calories, with none of the negative tooth decay or insulin release effects of sugar. Xylitol also has a low glycemic index of "7" & has little effect on blood sugar levels.
​XYLITOL HEALTH BENEFITS:
1. Helps Prevent Cavities: As xylitol is a non-fermentable sugar, it can't be converted to acid by oral bacteria. Thus, the alkaline-acid balance in the mouth is maintained, which helps in preventing cavities.
2. Helps Tooth Enamel & Strength: Helps decrease plaque formulation & promotes salivation to prevent “dry mouth”, which aids in enhancing mineral absorption for repairing damaged tooth enamel, while increasing tooth strength.
3. Safe For Diabetics: Unlike sugar, xylitol is not easily converted to fat, & as such, it has almost no effect on insulin levels, making it a safe sugar alternative for diabetics, pregnant/nursing women, dieters, body builders, & also babies & children.
4. May Slow the Growth of Cancer:  Xylitol helps prevent bad breath, ulcers, and stomach and oral cancers by slowing down the growth of Candida Albicans (a serious yeast infection which occurs in both men & women). Also curbs other harmful bacteria like H. pylori, the bacteria that causes stomach ulcers.
5. Helps Prevent Ear Infections: Xylitol prohibits certain bacterial growth to help prevent ear infections in young children. It will also help clear out earwax and prevent the growth of harmful bacteria in the pharyngotympanic tubes, connecting the nose and ear.
6. May Improve Bone Density: Xylitol was shown in studies to help improve bone density, indicating it may be a successful treatment for osteoporosis.
7. Increases White Blood Cell Activity: Taken in small amounts, xylitol can help increase the white blood cell activity in fighting bacterial infections, building immunity to protect against chronic degenerative disease. Also possesses anti-aging benefits.
8. Prevents Streptococcus Mutans In Newborns: When used by nursing mothers on a regular basis, it helps reduce the transmission of Streptococcus mutans (oral bacteria that causes cavities) to children by up to 80% during the first two years.
9. May Help With Allergies & Sinus Infections: When used as a nasal spray, xylitol may reduce the prevalence of sinus infections, asthma & allergies. It helps decrease the amount of harmful bacteria that may be in the cells of our nose.
10. May Lower Risk of Ovarian Cysts: Studies show a decreased risk of developing ovarian cysts & polycystic ovarian syndrome (a condition that disrupts or stops the ovulation cycle). Also may help decrease fibroids, endometriosis, premenstrual syndrome & possibly breast cancer.
Credit to Author: Dr. Edward Group, additional links by DBZ
XYLITOL IS TOXIC TO DOGS & CATS

IMMUNE-BOOSTING ESSENTIAL OILS:   Increasingly, germs, bacteria & respiratory viruses that surround us have never been stronger or more antibiotic-resistant. Documented research indicates that most viruses, fungi, & bacteria cannot live in the presence of many essential oils. Dat's Good CBD Splash is flavored with powerful, germ-killing essential oils, which are gentle yet powerful elements in the battle against bacteria, fungi, & viruses year-round.  The New England Journal of Medicine (04/07/2005) cites the growing prevalence of MRSA in cities across the U.S., some of the infections have been associated with flesh eating bacteria syndrome, also known as necrotizing fasciitis.  Essential oils have been proven effective in treating these bacterial killers, as well as E Coli & the bacteria responsible for deadly pneumonia.

YUCCA:   Yucca has been used for hundreds of years by Southwestern Native Americans for pain & inflammation caused by arthritis & rheumatism. It is known to reduce joint inflammation & successfully treats allergies while strengthening the immune system. In studies, 60 percent of people who took yucca supplements experienced diminished pain, swelling, & stiffness. There were no side-effects. Further, those who took the yucca extract supplement had lower blood pressure & cholesterol levels, & relief from intestinal toxicity. (Journal of Applied Nutrition,Vol.27, No.2 & 3)  "Sterodial saponins also may break down the high molecular fats in foods.  Absorption of those fats contributes to high blood pressure, hardening of the arteries, hypertriglyceridemia, & hypercholesterolemia. One of the study's most significant findings was that no patient taking saponin extract for 6 months or more continued to show an abnormally high blood pressure or excessive blood triglyceride & cholesterol levels. In other words, there were permanent health benefits." (Dr. Robert Bingham, Arthritis News Today, Vol 2, No 6) Scientists are now looking at how yucca can help humans fight fungal infections, combat microbes & viruses, boost the effectiveness of certain vaccines, & knock out some kinds of tumor cells, particularly lung & blood cancers.

MINERALS, FULVIC IONIC TRACE:   By acting as a powerful antioxidant, minerals aid in the body's absorption & use of vitamins & its ability to remove toxins. The benefits of adding minerals to the diet are:  increased energy & sense of well-being, more restful sleep, reduced arthritis pain, improved circulation, improved growth & appearance of hair, nails & skin.

Death-Breath Zero uses as its “immune supporting” base blend the essential oils of Cinnamon, Clove, Lemon, Eucalyptus Radiata and Rosemary, our version of the “Thieves” blend by Gary Young of Young Living.  The original blend was developed based on research about the effect of essential oils on the immune system and it all started from a legend of four thieves that has been referred to in a number of aromatherapy books.  The premise of the story is based upon the bubonic plague outbreaks which decimated Asian and European cultures, and legend has it that thieves captured and charged with stealing from the dead were offered leniency if they would reveal how they avoided contracting the infection as they committed these thefts. They revealed that they applied a mixture of herbs and vinegar to themselves before setting out.  Now that essential oils have been proven to be effectively antibacterial and antiviral, any number of oils can be used to effect the same immune response, but the "Thieves" blend is a pleasant combination of scents and flavors, and that’s why Death-Breath Zero has found it to be the ideal blend for our outstanding formula. Our version of the "Thieves" blend leans more toward Cinnamon.