Two of Shungite's most fascinating properties are that it has the ability to absorb & neutralize harmful EMF's due to "fullerenes", which are hollow, polygonal molecules of pure carbon, with 32 facets,  12 of which are pentagons and 20 hexagons (picture a soccer ball). Almost no materials in the world contain these fullerenes, which are what is believed to give shungite the ability to block EMF radiation. Until fullerenes were found to be in Shungite, their existence in nature wasn’t even proven.

Another fascinating property of shungite is its ability to purify water.  "Shungite water” is made by leaving the stones in water for a few days; this practice goes all the way back to Czar Peter of Russia.  He provided water purified by shungite to his soldiers, and he established the first ever spa in Russia near the Karelia deposits.
Shungite has the ability to clean things like nitrates, chlorine, bacteria, and heavy metal from water.  It is also powerfully antibacterial.  In tests, harmful bacteria were introduced into water and in as little as an hour, these bacteria were dramatically reduced.  Modern tests since then have confirmed the amazing water purifying capabilities of shungite, and it is now commonly found in water filtration systems.  The shungite in the following listings are what's known as "Elite Shungite"  See EMFAcadamy.com for more information.

FIND MORE OF SHANNAN'S WORK AT THIS LINK 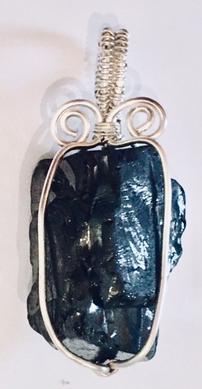